After a couple of days at Mount St. Helens, we head to McMinnville, OR, home to friends Patty and Kent.  Patty and Hannah became fast friends at the College of Nursing at Arizona State University in the 1970s.  Friday night is out for Mexican food and a Saturday a visit to two Willamette Valley vineyards; we end with a boisterous game of Mormon Bridge with two of their three kids.  (n.b., Mormon Bridge has turned out to the best family card game the Rothermels know for laughter and good family times.)

Yes, you aerophiles (lovers of all things aeronautic) may have perked up when I mentioned McMinnville.  Yes it is here at the Evergreen Aviation and Space Museum, we see Howard Hughes’ infamous “Spruce Goose.   Built almost entirely of birch because of wartime restrictions on the use of aluminum, the Hercules is the largest flying boat ever built and has the largest wingspan of any aircraft in history!

The “Spruce Goose” of Howard Hughes

Sunday is Hannah and Dan travel day and we are up and out heading south/southeast for Crater Lake National Park five hours away.  Once on I-5 south, we seek a locals breakfast place.

We have seven guidelines for finding such a diner or café for breakfast.

With only two of the 20 tables occupied, Pat’s is not rocking this Sunday morning, when you think it might be.   Whenever possible when we are out for breakfast, we opt for biscuits.  Today with a hike ahead at 7000 feet, we make the safe choice with eggs, home fries and biscuits with our coffee for $6.50.  Not a burning deal, but we like the feel of the place and just want to support Pat and Bud; they could be your grandparents and still working, you know!

Pat and her husband Bud are in their mid-70s and dearly want to sell Pat’s Kozy Kitchen.  Bud says its “turn the key” ready for less than $200K.  Online we learn it can be had for $199K and you can learn more by clicking on this link.

What once would have sounded to us like a romantic dream job stirs no interest at all.  One, it’s work.  Two, Sutherlin abuts the small village of Nowhere.  Three, it’s up at 4A and out at 9P that night.  Four, it’s not New England.

Soon we are following the meandering Umpqua River east on route 138 through pine forests.

Now six hours since we left this morning, we are just so ready to get up and out to hike.  Entering Crater Lake NP from the north we are soon on the Rim Road that circles the caldera that is Crater Lake for 33 miles. 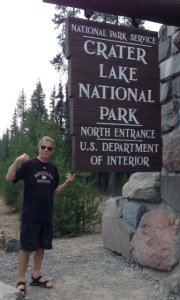 As Hannah drives I am literally inches from certain death on this rim road.  The drop offs on the passenger side of the car are similar to those of the Going to the Sun drive at Glacier National Park in Montana.  The shoulder is pencil thin, which kind of spoils the view.  Hannah’s steady hand at the wheel gets us to the Rim Village Visitor’s Center.

Arriving at 1P at 73F, when much of Oregon is going to 90F today, we find what happens to any vacation destination within hailing distance of California.  Cars from the Golden State dominate and overrun the parking lot.   Eventually finding a parking place, we can’t get our hiking boots on quick enough and make a bee line for the lake.

In the distance we see Garfield Peak looking from the east end of Rim Village.  We never find a sign to start the trail.  But the trail is obviously the one between the Crater Lake Lodge and the lake itself. 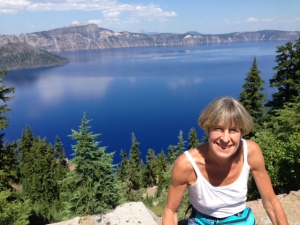 Do you have a new definition of blue?

No matter where you hike in this country and no matter how crowded the parking lots are, if you go three tenths of a mile along any trail, you will find 90% fewer people.  Today our hike begins at 7100 feet with a relentless, steady climb through an alpine meadow.

At any point, you can look left and see this awe inspiring lake (and that is no hyperbole!).  The lake partly fills a nearly 2,148-foot deep caldera that was formed nearly 8000 years ago by the collapse of the volcano Mount Mazama.

Though much of the initial section of the trail is dusty lava packed dirt, the trail of switchbacks turns rocky as we approach the summit of Garfield Peak at nearly 8000 feet. 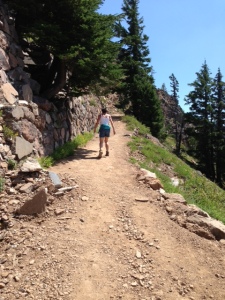 Though it is rated a difficult hike, it takes us only 45 minutes to get to the top.  The climb is a steady Eddie climb and my breathing is heavy. But I think that it’s Hannah’s due excellent pace, not the altitude.  Never does the trail have perilous ledges; that said, it’s important not to be an idiot.

We are told that the trail is usually covered in snow from October to early July.  The top portion of the trail may be covered in snow until late-July.   Today in the first week of August there is not a hint of snow.

Dan and Hannah on top of the world at Crater Lake

The son of a French family snaps our picture.  Crater Lake is the deepest lake in the United States and the second deepest in North America (after the Great Slave Lake in Canada).

Heading back on the switchbacks on the Mount Garfield trail

No rivers flow into or out of the lake; the evaporation is balanced by rain and snowfall.

The Garfield Peak trail is very obvious, with no chance of getting lost as we are always in sight of the Rim Village.  The hike down is 35 minutes to the Crater Lake Lodge.

Once done, we take in the National Park film of the origins of Crater Lake.  Surprisingly when we emerge, there is a smoky layer descending into the pines of the valley.

It seems the wild fires 50 miles to the south of the Park deliver smoke on schedule each mid-afternoon.

The not so blue Crater Lake