After hiking to the cliffs above the Gulf of St Lawrence on the Skyline Trail in the Cape Breton Highlands Provincial National Park earlier in the morning, midday we take to the park road reminiscing of biking adventures past on the Cabot Trail.  How five years ago we barely pedaled up MacKenzie Mountain and later had to walk our hybrid bikes up the final half mile of the granddaddy of them all, North Mountain. 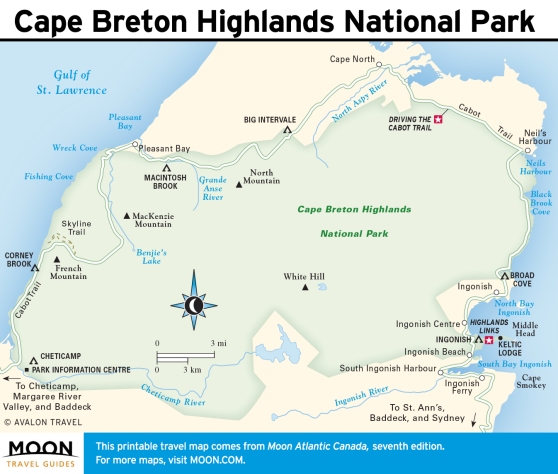 MacKenzie was a four kilometre climb at an 11% grade that five years ago had Hannah and me in our lowest gear pedaling successfully to the summit.  Enjoy the excerpt and pictures from our bike climb that day.

I don’t sleep well.  With the serious mountains of the Cape Breton Highlands National Park looming, Hannah and I wake before five AM as dawn streams in around the shades this third of June.  Uncertainty lies before us.  We have no idea what to expect and have little choice but to pedal on into the mountains as our Hyundai Elantra is 60 miles back in Baddeck.  We like to think we are resourceful in the face of such physical challenges.  Well, let’s just see if we can walk the walk? 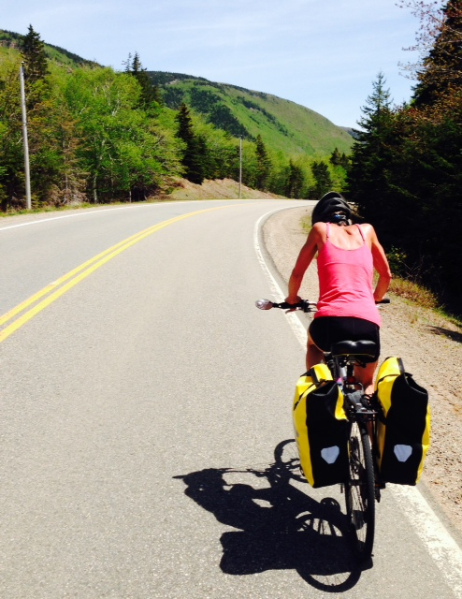 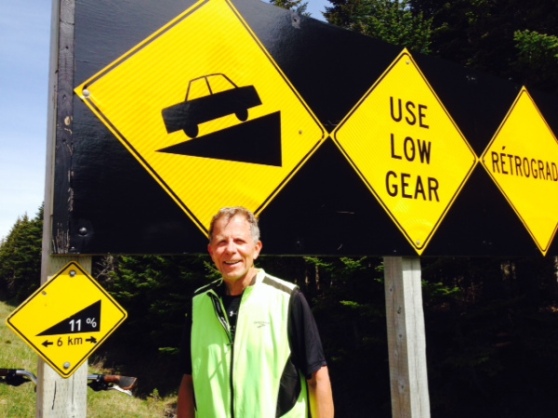 Today, after passing the marina at Pleasant Bay, we remember the unrelenting climb to North Mountain, our personal Waterloo.  After a kilometre of effort, we said no mas and could bike no more.  Dismounting but not defeated, we pushed our bikes to the mountaintop knowing that successfully biking up two out of three these bad boy mountains ain’t bad (homage to Meatloaf).

Midday, we have no such drama as our perky Prius takes the mountains as you might expect a car would do on paved road!  After lunching at a picnic table at the trailhead of the Macintosh Brook trail, we enter the forest for the second of our three hikes this day.

A mere twenty minutes to the falls, the level trail along the brook is rocky and rooted, but not challenging in the least.  Tree-covered the entire way, the wide path takes us to a waterfalls fifty feet away.  Our grandsons Owen and Max would romp to these falls in half the time.  Enjoy the video.

Though modest, the trail gives us forty minutes of exercise and a few thousand more steps on our Fitbits.  We are living the vacation hikers dream on this island paradise that seems within sight of Greenland (a much coveted land mass these days).

Click here for the Day 2 blog of our biking the Cabot Trail.

As we did five years ago, this morning we feast on Laverne’s blueberry pancakes and cut-up fruit bowl of cantaloupe, strawberries, grapes, and peaches at her Baddeck (Nova Scotia) Riverside B&B.  Unlike 2014 when we set out on our hybrid bicycles for four days pedaling on the 190-mile paved Cabot Trail, today we are going to mellow out and drive the entire trail by sunset.  Soft?  You could make a case for that. 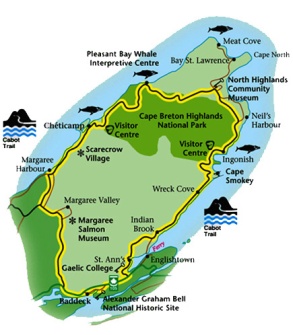 Five years ago, it took til mid-afternoon for us to bike the 55 miles from Baddeck to Cheticamp along the Atlantic Ocean.   Today by 11A we have arrived.

Here’s an excerpt with pictures from the blog of our first day biking the Cabot Trail five years ago.

Within the first hour we have our first climb to the top of Hunter Mountain.  It’s a 5% grade for two kilometres which requires steady pedaling in lower gears. It turns out to be very doable and our confidence builds.  Zipping down the far side, Hannah leans over her handlebars and rockets down the hill.  A little less steady and less confident, I sit tall in the bike saddle to let the wind resistance slow my rapid descent. 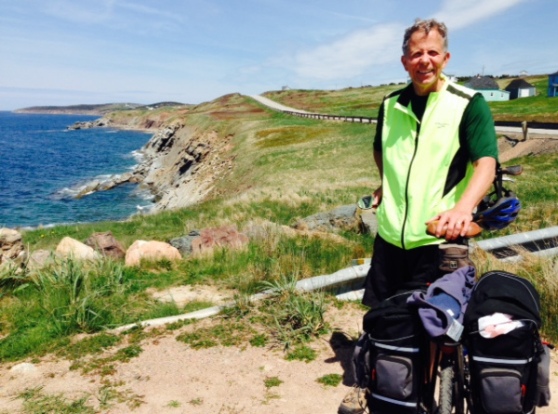 Today, driving 10 miles north of Cheticamp, we pull into the Visitor Center of the Cape Breton Highlands Provincial Park, each pay $6.80 Canadian for admission, and ask Liam, a park ranger, what’s the signature hike in the park. 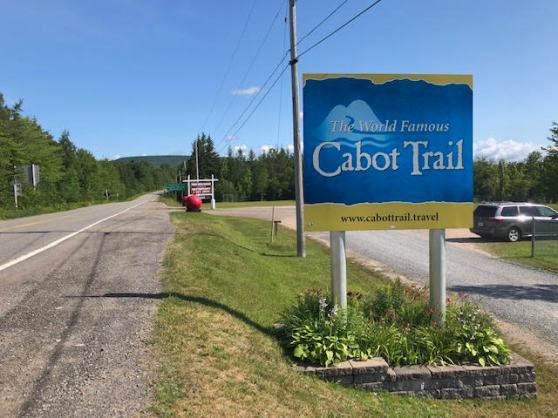 Without hesitation, he offers up the Skyline Trail.  That will take us past French Mountain, our first seriously steep, give-it-our-all, low gear climb in the park five years ago.  Open from mid-May through the end of October, the Skyline Trail is rated easy as it is a gently sloping two miles to the headland cliff with a modest 400’ of elevation gain back to the trailhead.

Due its modest challenge, the Skyline Trail has lots of folks during this first week of August.  For the most part, they so Canadian.  And by that I mean, they are polite, upbeat, and amazingly tolerant of their entitled American neighbors to the south.

Digging life among happy vacationers of all body types, Hannah and I walk side-by-side on a trail of crushed gravel that rarely gets our heart pumping.  The trail is a delightfully pleasant walk to the west coast of Cape Breton.

Passing through a moose enclosure (sans moose!), we learn that botanists are researching what plants and trees coexist with hungry moose.  Beyond the enclosure, we see trees with healthy branches near the ground, middle ones chomped away by Bullwinkle and his friends, and then branches above that the moose can’t dine on. 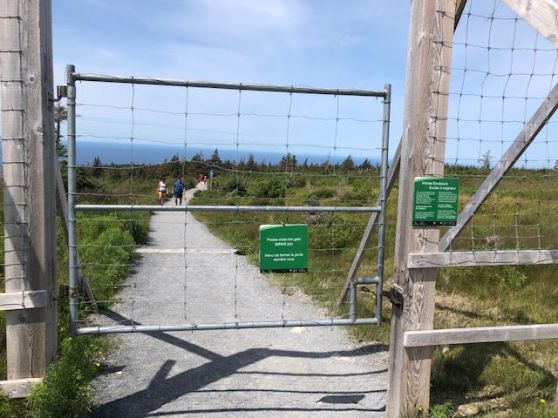 Leaving the moose enclosure with the Gulf of St. Lawrence in the distance 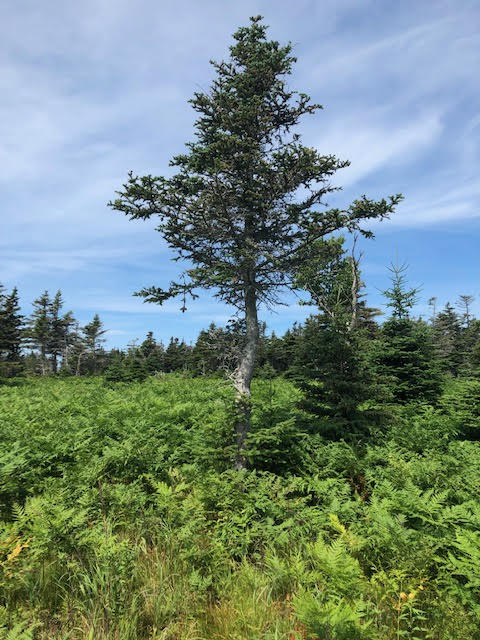 Once above the cliffs we are greeted (metaphorically) by a wooden boardwalk staircase down the cliffside.  At midday, the crowds are plentiful, as many are resting and lunching after their three kilometre trek.  The boardwalk was built after hikers had trampled this headland, which in turn denuded the vegetation that led to the exposed soil being strewn across the Gulf of St. Lawrence. 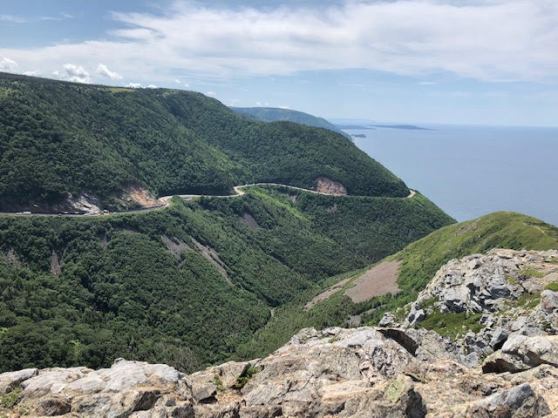 An easy 45 minutes back to the trailhead gives us the two hour morning workout to satisfy our desire (by that I mean need) to get the first of our 10,000 Fitbit steps.

Back in our yupster Toyota Prius, we drive up the even steeper Mackenzie Mountain and North Mountain on our way to the Macintosh Brook trail with its Liam-promised waterfalls.  I have waterfalls for you in next week’s blog.

Click here for the full blog from Day 1 of our biking the Cabot Trail in 2014.

While Hannah finishes her shower upstairs at the Baddeck Riverside B&B, which sits in the far reaches of Cape Breton, Nova Scotia, I head to the kitchen to chat up Laverne as she makes breakfast.  Encouraging me to pour a cup of coffee (regular), she and I talk of our families and the drive along the 300 kilometre (190 miles) Cabot Trail that Hannah and I will take today; it’s the same route we biked five years ago over four days.

Though a decafe drinker, I pour myself a full half cup (so the coffee stays warm) and settle in for conversation with Laverne.  You see, in June 2014, she welcomed us like family by having Hannah and me sit with her family for an evening glass of wine before our biking began.

This morning, as she makes blueberry pancakes, we back and forth in conversation as I risk a second half cup of regular coffee, daredevil that I am, knowing that too much caffeine makes me jittery.  Throwing caution to the wind, I figure ‘what the hell’ as I feel at home in our conversation about hummingbirds, gardens, adult children, her two and our three, of complicated lives, and small town living.

Reveling in the morning and not thinking twice of how caffeine will later have its way with me, I pour a third half cup of coffee as Hannah seamlessly joins in.  It’s not so much the subjects but the feel of connection and sharing in personally meaningful conversation.

Ever the bon vivant, I have a piping fourth half cup then follow it with a fifth.  Morning coffee with friends is on the “A” list of things I love doing.  Throughout this time Laverne doesn’t know, and I never mention, that I usually drink just decafe.  I readily understand the consequences of my actions and take full responsibility.  Moments like these don’t come along every day.

Though I will have the buzz of caffeine and then its crash by late morning, not to mention the multiple pit stops on the road, I’m digging the morning that I don’t want to end.  In these moments of friendship, I’ll pay the price to keep this feeling going as long as possible.

You see, as I pour a sixth half cup, I feel a warmth of coming home 700 miles away from our place in York, Maine.

Last April, Hannah and I came to Ithaca, NY, the birthplace of our grandson Brooks and the site of his future presidential library, to hike the Buttermilk Gorge Trail.  The trail, not the future library, is conveniently located within three miles of our son Will and daughter-in-law Laurel’s home on the South Hill of this college town (i.e. Ithaca College and the Arizona State of the East – Cornell University).

For those of you who haven’t visited this area in the early spring, the trails can still be slippery due to ice.  And so it was five months ago, the Buttermilk Trail was barricaded due to icy conditions.  As you might imagine, we had hoped to see spring waterfalls that are real, and they are spectacular.  After the winter snows, the spring falls overflow with love and abundance such that would make Marianne Williamson proud.

Five months later, Hannah and I come to Ithaca on the last day of summer 2019 with unseasonably warm 80s for a redo of this gorge-ous trail.  Driving ten minutes to the upper parking entrance (see map below), Hannah and I take the Rim Trail down through the forest to the base of the falls in 20 minutes.  Our plan is to then climb back up the gorge on the majestic granite and slate stairs of the Gorge Trail to see the many waterfalls head on. 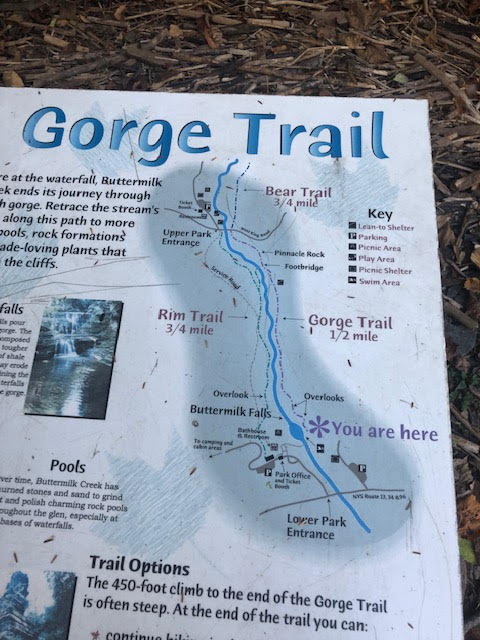 How do you solve a problem like Maria, make that Hannah

On a day when the nationally ranked #11 Ithaca College Bombers tied traditional soccer power SUNY Cortland at two and battered Alfred University (27-9) in football to remain undefeated, Hannah and I have the time, not to tailgate with the undergrads, no, no, but to Fitbit step all morning long!  (By the way, our son Will works in the athletic department of IC, hence the homage to the IC sports teams.)

Climbing 600’ of elevation gain over 1/2 of a mile, we have falls tumbling down the gorge to our left.  Enjoy the pictures and the Spielberg-quality videos. 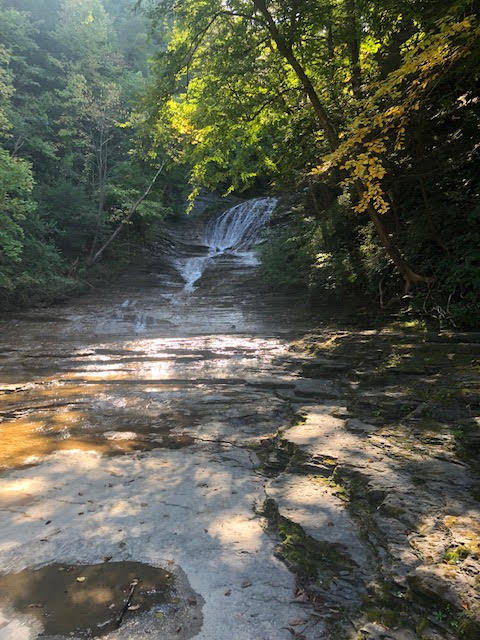 The following morning Will and Laurel have a breakfast date at the Main Street Diner in town while Hannah and I look after our fifteen month old grandson Brooks.  Later that morning, we all hike at the Taughannock Falls. 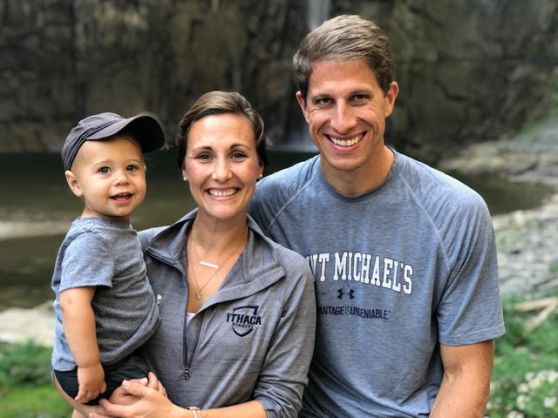 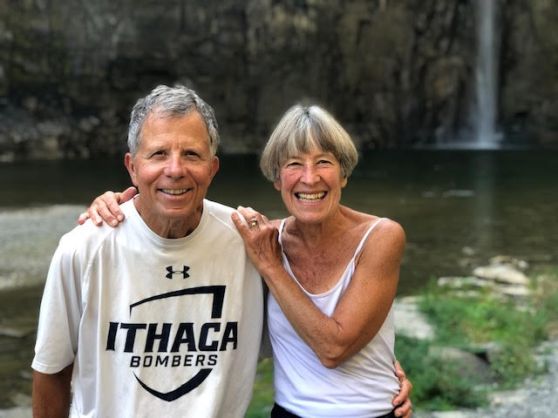 For Will and Laurel, Brooks, and Hannah and me, coming to Ithaca is win, win, win.