Do you know Cheryl?  She hiked the Pacific Crest Trail (PCT) back in 1995.  Years later in 2007, she wrote Wild: From Lost to Found on the Pacific Crest Trail, a memoir of coming out the other side of addiction and a broken marriage by thanks to the insights she gained solo hiking.  Oprah loved her.  Reese Witherspoon bought the rights to make Cheryl’s story into a movie, and then star in it.  Four stars for Cheryl’s book and four stars for Reese’s movie.

As a thru-hiker of the PCT, Cheryl began in Mojave, CA, which is north of the traditional point for thru-hikers – that at the Mexican border with California.  From there she headed north for Oregon and Washington on her way to Canada. Summer temperatures in the 100s in southern California desert are not uncommon. Of late, because of the 15 year old cyclical drought in the West, streams have dried up on the PCT often making reliable water stops hard to come by. 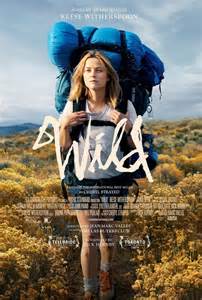 Though Cheryl skipped some of the mountainous sections of the trail in California due to heavy snows and ended her pilgrimage in northern Oregon, that doesn’t diminish the self-awareness she gained by challenging herself, let alone her tremendous physical accomplishment.

Hannah and I are no Cheryl Strayed wannabes. Backpacking?   Please. We have no interest in overnight camping along the trail or in hiking more than three or four hours at a time. We no longer have the joints, muscles, or “want to” to hike long distances. While we have set a mission to hike in all 14 of the Appalachian Trail states (We plan to hike Georgia, the last of our AT states, this October), today we want to taste the first of the PCT’s Three.

Leaving Vancouver, WA in early June, we drive along the Columbia River Gorge on Route 14 looking for the PCT, which we know crosses from Oregon into Washington at the Bridge of the Gods. (A bridge that has a $1 toll for cars and charges walkers 50 cents (mind you there are no sidewalks on this 80 year old grated bridge). PCT thru-hikers cross for free.

It turns out the PCT enters the forest within 200 yards of crossing the Bridge of the Gods in Washington.   With ample side-of-the-road parking in the shade on this day that is going into the mid-90s, I dress in lightweight shorts and an Under Armor Bomber shirt (Ithaca College).  We soon feel the sweat glistening on our arms and legs. Having not seen any mosquitos while hiking during the past week in the Northwest, and assuming if there were any mosquitos here, they are vacationing in Maine for the summer, we again dismiss the need for insect repellant.

Within 300 yards, we hear, and then see a man with a backpack. Eureka, a thru-hiker.   It turns out Donovan (his trail name) left the Mexican border just after Christmas five months ago!  Today he enters his third of three PCT states, Washington, having hiked more than 80% of the PCT’s 2775 miles over the Sierra Nevadas of California and Cascades of Oregon. 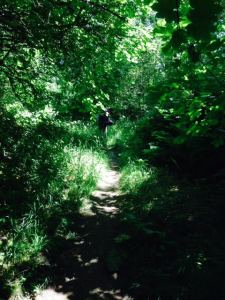 Donovan is from Northern Ireland and served 11 tours in the British Air Force in Iraq and Afghanistan. I wonder if he is using this thru-hike to deal with the horrors of war. There is a program for American veterans called Walk off the War, where discharged soldiers hike the 2180 miles of the Appalachian Trail to help their reentry into civilian life. Hannah asks about the black stone pendant he is wearing. Without sadness or self-pity in his voice, he tells us that it’s from the ring of one of his sons who died fighting in Iraq.

The overgrown thorny brambles snag my Ithaca College Bomber shirt.  My loyalty is shifting from Virginia Commonwealth University (VCU) to Ithaca College (IC) now that our son Will has taken a position in the athletic department at IC in central New York.  The transition will have its bumps as my very best clothes come from VCU. But we all must deal with change and so will I.  As we all know, Change is inevitable — except from a vending machine. (Robert C. Gallagher)

Hiking within earshot of the passing cars on Route 14, the trail goes from packed dirt to very rocky on a sun dappled afternoon where we feel the heat and humidity. Passing some clear cutting that I’m guessing occurred ten years ago, we see the rebirth in a mini-forest of six foot trees. The sun for all its Vitamin D glory creates shadows in the landscape and makes picture-taking with my iPhone5 a challenge. Nonetheless I will do my best to not let you down. 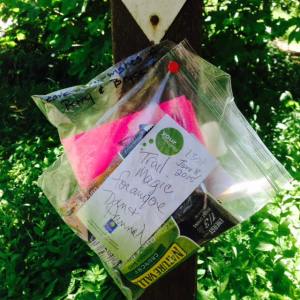 Returning to the trailhead after two hours of hiking, we see a plastic bag with a note for Bryce and Perry; we assume they are thru-hikers. That sparks us to put three packets of our Nature Valley granola bars in a plastic bag, identify them as trail magic (random gifts for hikers), and leave them for anyone hiking the trail. It’s our modest effort to pay it forward.

Debooting, we slip into rental Volkswagen Beetle, crank up the air-conditioning, and look forward to our Comfort Inn which is east on I-84 in The Dalles, OR.  This points out again that we are no Cheryl Strayeds or Donovans here on the Pacific Crest Trail.