When Bev told me, my first thought was I don’t know if I would have thought as quickly as she did.  Thanks to Bev’s quick thinking, lives were saved, and help was rendered.  Let me explain.

Our grandson Owen’s sixth birthday party is about to begin this last Saturday in July.  Already at the party at our daughter Molly’s and hubby Tip’s home, Hannah and I play board games with Owen and his younger brother Max (4) while we wait for the others.

Owen’s grandparents on Tip’s side, Ya Ya and Poppy, are driving down to the party from New Hampshire with Tip’s sister, the aforementioned Bev, her hubby Matt, and their two boys.

Bev in green in the back row; Ya Ya in white in the front row.

When they arrive, I greet Bev with a hug.  As we check in, I see Bev looks shaken.  She begins telling the story of the out-of-control car chase that they had just endured minutes ago.

For whatever reason, a car, at 1030 in the morning mind you, was weaving across the road recklessly in front of them (i.e. crossing into the opposite lane of oncoming traffic and back again).  Immediately, Bev as the driver started blasting her horn to alert others in the path of this car with “tragedy ahead” emblazoned on its front bumper.

Next Ya Ya dialed 911 from her cell phone to notify the police, relaying landmarks and street names as Bev continued to follow the incapacitated driver.

Fortunately, the incessant cacophony from the horn alerted a young woman on a bicycle soon enough for her to dive into the roadside woods.  Easily, the driver could have killed her.

After a mile of erratic driving, the harrowing ride was over as the driver plowed into a large tree.  At this point, Bev pulled over and hurried to check on the driver to see a man, maybe in his 50s, bleeding badly from his head.  Almost immediately five patrol cars from the area were on the scene.  A bad mix of medication?  Alcohol?  Drugs?  We never learned.

What would you have done if you had seen a car weaving back and forth in front of you across the suburban road?  Would you have thought quickly enough to follow?  I have no idea what I would do; Bev had three seconds to decide or the driver could be gone.

Would you have thought to lay on the horn to warn others?  I definitely wouldn’t have; but thanks to Bev’s example, I would now.  Later, at the scene of the crash the bicyclist thanked Bev for saving her life.  No hyperbole there!

Would you have had another passenger call 911?  My answer is probably yes, but who knows in the heat of the moment.

And once the driver crashed, would you have gone to his side immediately?  I hope I would’ve.  I think I would’ve.  I guess none of us knows.  Only Bev has the evidence what she would have done. 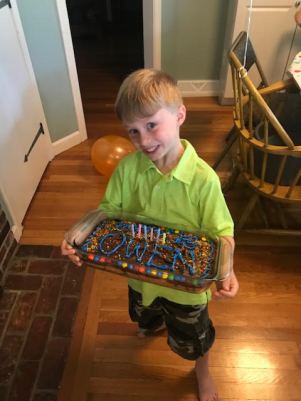 All in a morning’s work, Bev saved the bicyclist’s life, her mom alerted the authorities to a life-threatening situation, and then we all celebrated a six year old’s birthday.