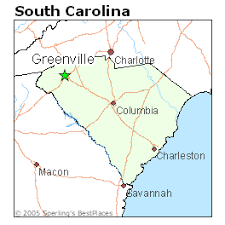 When Hannah and I travel, I always check the USAPA pickleball website for places to pickle.  Once I find one that fits our schedule with day and time, I email the ambassador.  Today John Moore welcomes us to the stunning six new dedicated courts at Timmons Park in Greenville, SC.

With a 9A temp of 73F, we sharpen our game on this last Monday in October.  Shout out to Sue, who is the highlight of the morning for Hannah.  As pickleball partners, they laugh, encourage each other; they win some, they lose some.  Good folks like Sue don’t come along every day, but she sure did this morning in the Palmetto State.

While waiting to play, I ask picklers about hiking in the area and learn of Paris Mountain just outside of town.  Perfecto!

The Sulphur Springs Trail is in white.  We start at the lowest P (for parking) on the map and go clockwise on the loop trail.  The checkered section is where mountain bikes dare not go.

At the trailhead is a large wooden map of the Sulphur Springs Trail which I take a picture of.  (And yes, prepositions can be at the end of sentences!)  The advice to hike clockwise has us tackling the heavy lifting part of the trail at the start.

Our trail begins with a walk in the woods through upstate South Carolina forests.  Within the first fifteen minutes three separate millennials pass us by.  Greeting them in passing, we always love seeing others on the trail to know that we are not lost. 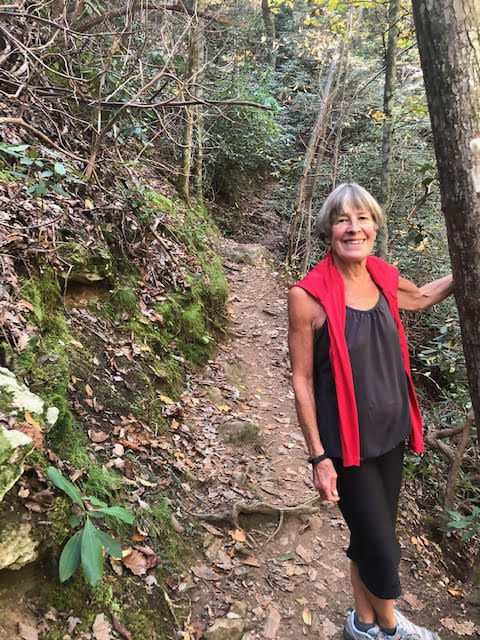 Entering the checkered section of the trail, which is one that prohibits mountain bikers, we step up and around rocks and small boulders.  This section gives the trail its 9 of 10 rating as our hearts pump and lungs respond rhythmically as we venture further into the Carolina woodlands.

And hour into the hike, we come upon a wide fire road and turn right towards the trailhead.  Having bagged the toughest part of the trail, we are James Taylor-ing it (i.e. we have Carolina on our mind) and know it is all downhill from here.

With the trailhead in sight, we check our Fitbits to see that we’ve done the 3.8 miles of this macho trail at Paris Mountain State Park in less than two hours.  It’s a high-flying 20,000 step day!

I have hit the daily double of vacation travel – morning pickleball and afternoon hiking with Hannah Banana on a sunny day.

September and October are golden months in Maine – daytime highs in the 70s in September, 50s/60s in October with the dark and cold of winter seeming like Stephen King fiction.  (Sounds like somebody is ready for some Vitamin C [that is Vitamin California!])

But this year in late October we are traveling; we have our Wedding of the Year in Asheville, North Carolina.  You see, my college roommate Big Steve and his wife Amelia’s older son, the stunningly handsome Brandon is marrying the breathtaking Ashley.

Ah, the American South in October.  With many opportunities to hike and play pickleball, the fall has none of the heat and humidity of its summer.   Here come the Mainers.

Landing at Hartsfield-Jackson Airport in Atlanta, Hannah and I drive northeast for three days of pickling and card playing with our Yonah Mountain brethren and sistren (sistren is an actual word).  After Laurie, Linda, Pat, and Clarissa once again take us in as pickleball family, we motor two hours north to the North Carolina/South Carolina border to hang out with our sister-in-law Becky and her guy Derek. 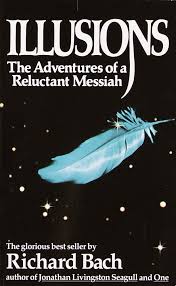 Becky married Hannah’s brother Doug in 1982; he farmed buffalo, make that bison, and she taught piano in central New York.  Unbelievably seventeen years ago, Doug, as fit as anyone we knew, died in a matter of weeks of glioblastoma (brain cancer).

At his memorial service, among many others, I eulogized him with this quote from Illusions: The Adventures of a Reluctant Messiah by Richard Bach – Here is a test to find whether your mission on earth is finished; If you’re alive, it isn’t.  Doug profoundly touched many people and his work was done at 56.

Moving to Portland, Maine from New York, Becky lived 45 minutes north of us in York, which allowed us to have monthly sleepovers, either at her place or ours.

After Maine, Becky moved to the little liberal burg of Tryon, NC with her guy Derek to make a life together.  So when Brandon and Ashley scheduled their wedding an hour north of Tryon in Asheville, we had one more reason to renew our kinship with Becky – and more sleepovers. 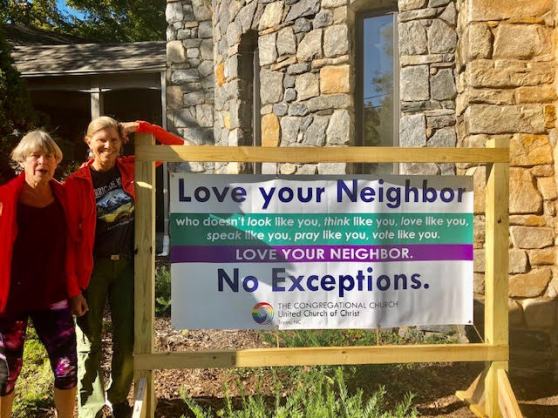 Hannah and Becky in front of the Tryon Congregational Church.  Do I hear an Amen?

On our first morning together, Becky takes us to the Palmetto Trail, ten minutes from their home, a trail that crosses South Carolina from northwest to southeast ending on the coast near Charleston.

Driving around Lake Lanier, we park at a trailhead on a Thursday morning in late October for a walk in the woods, past a waterfall, and into the mountains.  Let these pictures and iPhone video illuminate this magnificent trail with our magnificent Becky. 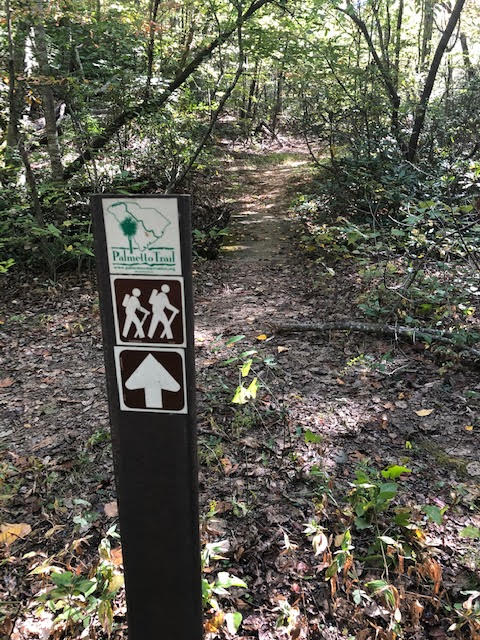 By the way, a palmetto is just what you think it would be – a smaller version of a palm tree.

Becky and her guy Derek; sadly he was on the short end of the 2018 World Series.  Go Sox!

Do you know what a halfback is, and I don’t mean a kind of football player?

It seems many retirees from the Northeast who have been worn down by winter’s ice and snow move to a Florida retirement community.   After a few years, Florida gets to them; perhaps it’s the traffic, congestion, being so faraway, the flatness, or mind-numbing sameness and they want to move back.  But they don’t want the winters in the Northeast either.  So, they move halfway back to North or South Carolina, hence they are halfbacks.

Our sister-in-law and hiking guide Becky now living in Tryon, NC has come up with another hike for Hannah and me.  Today we drive five miles to the man-made Lake Lanier just over the North Carolina border into South Carolina for the start of the Palmetto Trail.

Though the state of South Carolina is not a part of the Georgia-to-Maine Appalachian Trail (pronounced locally as App-a-latch-in), South Carolinians do have the 425-mile, multi-use Palmetto Trail from Lake Lanier to the South Carolina coastline.

Becky and Hannah begin hiking in the Palmetto State

This mid-October Monday morning with the temperatures going to 80F (40s in Maine!), we are one of two vehicles at the trailhead parking.  Setting off on a well-marked trail towards the distant Vaughan’s Gap, we three walk side-by-side on a tree-covered, red dirt fire road.

Squint and you can see Hannah and Becky

Hiking with Becky is a delight as she is a friend of nearly 40 years; she like me is an out-law (i.e. we married into the Kraai Family [my entre was Hannah Kraai and Becky married Hannah’s brother Doug Kraai]).  Though Doug died of brain cancer nearly 17 years ago, we have maintained our friendship with Becky over the years.  Hiking with Becky is a joy for she is a positive life force, sees the glass ¾ full as we all participate equally in the trail conversation. 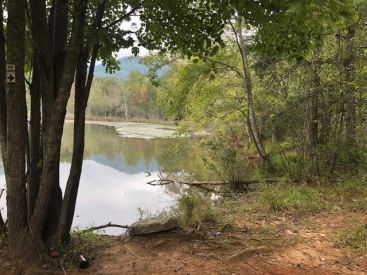 Though fall foliage color has come and nearly gone in our native Maine, here in South Carolina the brilliant reds, yellows, and oranges are waiting to burst forth in three to four weeks. 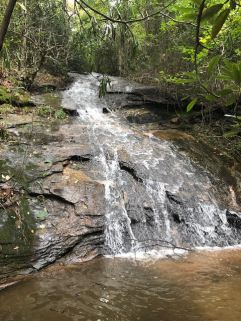 The trail gently rises until Becky veers right, through some brush towards the Palmetto Trail Falls, which she has learned about as a member of the local hiking group.  Flopping grass gives way to a narrow trail to the falls.  In short order we come upon a soul-enriching, life affirming, got-to-believe-in-miracles falls coming down the mountain ahead.  See the video below for yourself.

This side trail to the falls eventually weaves back to the Palmetto Trail which we take in the direction of Vaughan’s Gap.  After 70 minutes out in the Blue Ridge Mountains, we about face and return to the trailhead with the back and forth conversation of old friends.

That night, our short and sweet evening blessing is Thank you for the food before us, the family beside us, and the love between us.  (Thank you Tara and Anthony for these words.) 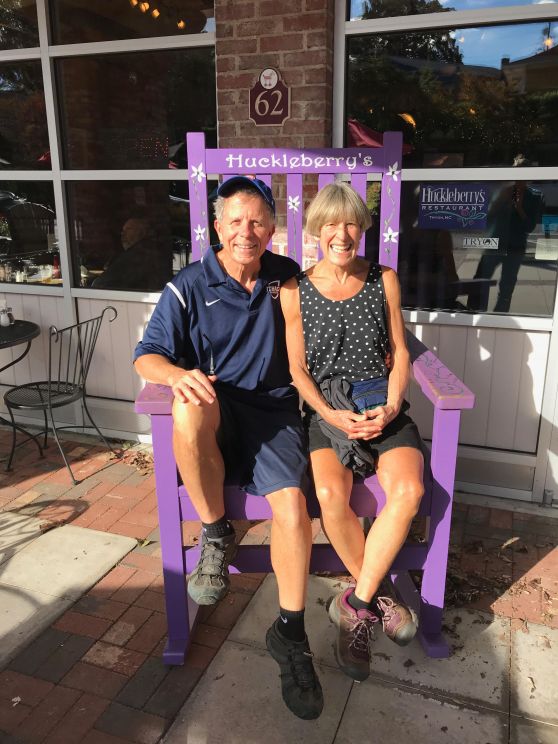