Arriving late afternoon on the northwestern coast of Washington this first week of June, we land at Forks, some 60 miles southwest of Port Angeles.  We are on a mission to find a comfortable motel room to watch the first game of the NBA Finals between the Golden State Warriors and Your Cleveland Cavaliers; by the way, games start at 6P on the Left Coast and we actually stay awake throughout them.

Our first choice is our last choice – The Dew Drop Inn.  AARP discount, two double beds, flat screen TV, even a cold breakfast with homemade waffles, cold cereal, and muffins.  All for $79.  We’ve been paying north of $105 in Port Angeles and Packwood the last few nights.

And for all you who perked up when I said Forks, the Dew Drop Inn has three Bella’s Suites based on the blockbuster Twilight series.  We opt for a regular room, but I got to say I loved the series.  Like J. K. Rowling of Harry Potter fame, Stephenie Meyer spins an engaging tale.  If it were so easy to write a blockbuster, everyone would be doing it.  September of 2015 is the tenth anniversary of the first book, Twilight.  This year Forks will hold a celebration the weekend after Labor Day for those of you who have your calendars out. 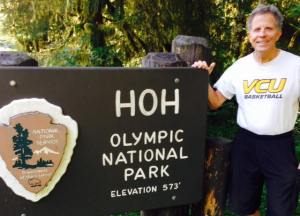 Heading south on The 101 (the same glorious road we have come to know and love in coastal California) through the forest, we know we are in lumbering, I mean “forest products” country.  Regularly passed by open-bed logging trucks with their massive loads of Douglas fir, we often see clear cutting of the mountain hillsides.  As a renewable resource, the forests are replanted and soon make for a beautiful hillside.  Still, in the meantime the patchwork clear cutting is not pretty.

Twelve miles south of Forks, we turn inland for the Hoh River Visitor Center as we enter the western section of the Olympic National Park. With 18 miles of winding road along the Hoh River to the trailhead, we are transported so far from York, Maine that we feel like explorers of the Amazon northwest.   We are Carole King So Far Away.

Along the Hoh River

The Hoh River Trail snakes 18 miles through the rainforest to the Hoh Glacier on Mount Olympus. Glaciers grind rock into a fine glacial flour which turns the Hoh River a milky slate blue. Our destination today is more modest as we are heading to Tom’s Creek three miles away. 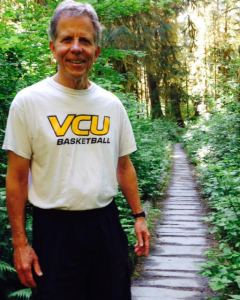 Hiking along the Hoh River, we find the trail a flatlander’s delight. We weave through the ferns, moss, and green-ness to our right, left, and center thanks to plentiful precipitation, mild winters, and cool summers.  While it will go near 90F inland today, we have a delightful 65F warming us this morning. For the third day in a row we have a hike that families will love with its leisurely, almost non-existent elevation gain. 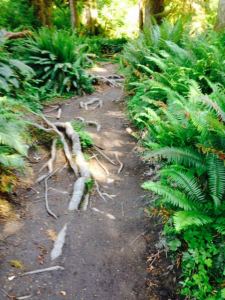 The terrain is foot-saving packed dirt with a few rocks and worn roots to make it interesting.  Amazingly, despite the rainforest climate and vegetation, we do not run into one mosquito or mosquita (feminine) throughout the entire two hours of hiking.

Glaciers are taking a beating in this part of the country as they recede at an alarming rate.   Global warming deniers need to come west and see the 1970 pictures of this area compared to what they see today.   Our grandsons, Owen and Max, and yours, too, need us all to reverse this trend together.

Amid God’s wilderness I feel a sense of righteous indignation about the issue of global warming. Too many of us can get caught up in our daily lives and do not see the forest for the trees. (You knew that was coming, right?) 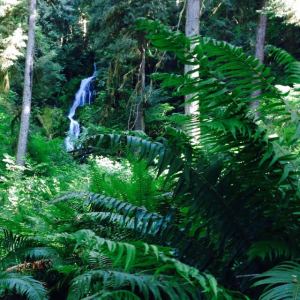 Finding the rushing waters of Tom’s Creek, we spot a waterfall in the interior through the leafy fronds and ferns of this coastal trail. The ranger tells us that this area has 0% of the snow pack that it normally does. That’s a big goose egg.   They have received their normal amount of precipitation, but due to the 1-3 degree increase in temperature this winter, the precipitation has fallen as rain.

With the dry season of July and August nearly upon them, drought conditions are concerns since the water from the melting snows won’t be released throughout the summer.  And yet if one looks with short-term blinders at the lushness of the rainforest, one can mistakenly think that everything is fine.  It is not.

As we head back to the trailhead other hikers have come to enjoy this jewel supported by our government.  Why are government workers seen as the bogey men and bogey women?  When we get out in the country and see the work these women and men do for the good of us all in America’s National Parks, we just got to wonder what the cable news haters are thinking. 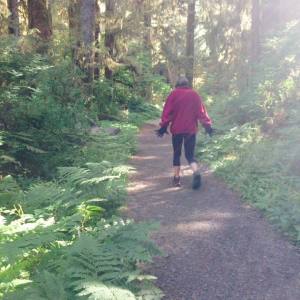 We pass frequent large chunks of wood from fallen trees that have been cut up to clear a path for us day hikers and our hardier brethren, backpackers. There were places through this lush forest, where our hiking day would have been finito since there is no way we could have climbed over or around these massive trees.

With the level trail, we are able to hike at a 3 mph pace on a glorious day with temps in the upper 60s.  If “Almost Heaven, West Virginia” is true, heaven’s younger brother resides along the Hoh River here in the Northwest. 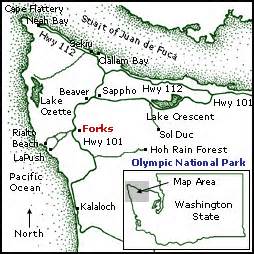 It’s June as we drive as far northwest in the Lower Forty-Eight as we can.  We pass within shouting distance of Seattle, home to the Seattle Seahawks -the best team in football not named the New England Patriots!   Bah da boom!  Later this month, Jordan Spieth will win the US Open at Chambers Bay at nearby Tacoma.  For us, it’s then across Puget Sound to Bremerton, then Sequim and eventually to Port Angeles on the Strait of Juan de Fuca for the night.

Heading north on two lane route 3, we see a sign that says if there are five cars behind you, it’s the law that you have to pull over and let them pass.  How cool is that!  We have seen more fir trees and pines per square inch then we have ever seen anywhere in the United States. Healthy, towering year round firs are packed together as if giants were boxing plants for shipment. I’m guessing that the downside to such density is that flames can whip through such tightly bunched arbors like, well, wildfire.

Hannah and I immediately take to Port Angeles – its modest size; its modest homes on modest streets at modest prices.   A three bedroom, 1.5 baths, 1080 sq. ft. goes for $125K.   In town many houses are priced for under $200K.   With winter lows seldom below 25F, Port Angeles receives a mere 4 inches of snow each year; summer highs are rarely ever above 80F.  We are talking amore!

Over wine, we look to Vancouver Island in the Great Nice North of Canada. Port Angeles feels like an outpost where the creative and middle class flourish. We pass a restaurant called Oven Spoonful and an optometry boutique called Specialeyes. It seems a place where one can be playful and check the serious business of growing up at the backdoor for just a little while.

Our rental VW Beetle in the background

Come the next morning we are nourished by another fantastic Quality Inn breakfast (Any breakfast of toasted biscuits and rich decaf is my idea of a primo breakfast. I am a simple man with simple pleasures.)  Packed up, we drive on winding roads to our destination of the Hurricane Ridge Visitor Center and the Hurricane Hill trailhead just 45 minutes south of town.

Along the way, Bambi and her daughter dip their heads onto the center of the road licking what I am guessing is salt. They are nonplussed about the cars passing by and look up nonchalantly as I snap this picture. At the end of this 17 mile drive to the mile high Visitor Center, there is an expansive parking lot with but 20 cars today; we then take a narrow road for 1.5 miles to the trailhead of the Hurricane Hill Trail.

Paved all the way to the top, the Hurricane Hill Trail is similar to other paved signature trails in major national parks.  Both the Angel’s Landing and Observation Point Trails in Zion National Park are paved much of the way. It is apparent that hikers are not always thrilled with the pavement as the grass on either side of the trail is now worn dirt and easier on the feet. 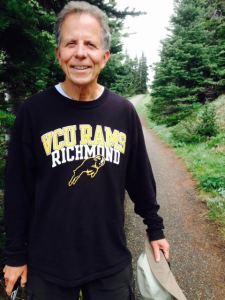 Though there is no threat of precipitation today, that doesn’t mean there aren’t clouds dominating the mountains of Olympic National Park.  With a 700 feet of elevation gain, the trail rises steadily over the next mile and a half.  Even on this first week of June Thursday during the preseason, there are many seniors on the trail through the subalpine meadows.  One woman we chat up, who is hiking with four friends in their 70s, tells us she hikes this trail regularly. Who needs a gym when you live in Port Angeles at the gateway to Olympic National Park? 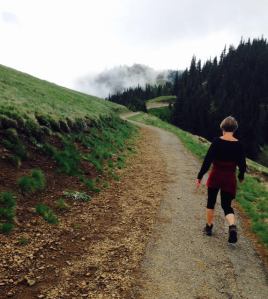 Along the trail we see Bambi’s kid sister and Bambi’s niece (technically I believe Disney’s Bambi is a male, but really how many males do you know named Bambi?) who are not the least bit bothered by our presence. Check out the video below.

Over the last eight tenths of a mile the trail steepens as we are soon climbing into the floating clouds that cover the summit. The major mountains to our north and the sea to our south are totally obscured. We enjoy this cardio workout among the high mountain grasses and wildflowers. 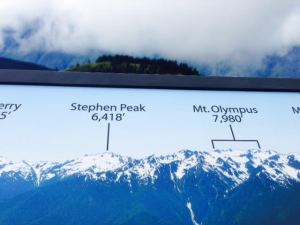 At the top we are fog bound. Views of Mount Olympus will be saved for another visit.  This panoramic photo gives us an idea of what we might have seen. With barking quads, we slowly inch down the mountain passing many other hopeful hikers.  Spotting a standing marmot above her hole, I step as close as I dare so as not to spook her. Aggressive coyotes are the reason for the declining marmot population here in the Olympic high meadows. 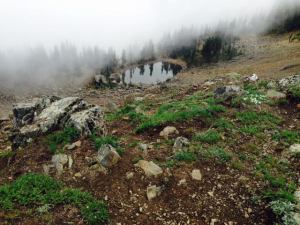 Truth be told the Hurricane Hill Trail is a family hike. We hike it up and back in under an hour and thirty minutes.  If you are planning a visit to the Olympic peninsula, come in June or September before or after the crunch of the summer tourist season.

An Olympic National Park ranger recommends the Marymere Falls Trail. Heading 20 miles west on route 101 towards the Pacific Ocean, we hug Crescent Lake along the highway as I grab the wheel at 10 and 2 to avoid being blown off the road by the monster logging trucks.  Lunching at the Storm King Ranger Station at Crescent Lake, we have our first day in five that is warm enough to have a Dos Equis with our peanut butter sandwiches, potato salad, and orange slices.

The Marymere Falls Trail takes us a mile through the dense rainforest of northern Washington. With little elevation gain, we walk through a Disney forest of moss hanging off limbs that give the trees witch-like qualities.

Thanks to our grandson Owen who has mentioned that his Poppa is never in the videos of our travels, Hannah takes the iPhone video to document our trip to Marymere Falls. So here is the falls one more time thanks to Owen.

With two family hikes today at the Olympic National Park, we drive inland some ten to fifteen miles from the Pacific to Forks, Washington, as Twilight approaches.