Hannah immediately slides down the rocky cliffside, 15’ or more, into the ravine; and I know because I am standing directly behind her.  The vertical drop between Hannah and me now is jagged with rocks and unstable dirt due to the recent heavy rains in the Santa Barbara area.  As a human mudslide, she later told us she grabbed for saplings on her descent down this nearly vertical rocky cliff.

And then suddenly, she is perched on a small promontory, some 25’ above the San Ysidro Creek, rich with boulders and trouble.  On the good news/bad news continuum, the good news is that it appears she has not hit her head on the way down.  I don’t know if there is any bad news… It turns out she and Tip do. 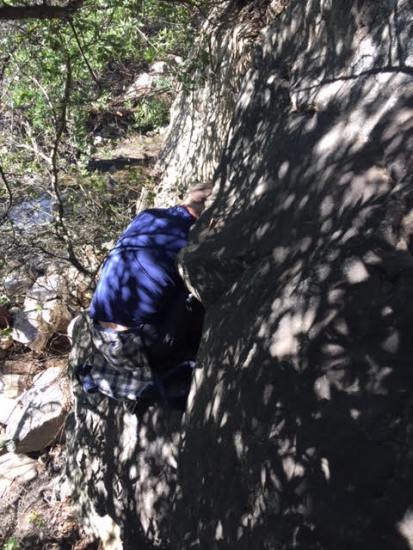 Tip on the cliffside preparing to take Hannah back to the main trail.  See the sheer cliff, the occasional sapling, and the creek far below

At this point, Tip passes their son Owen off to Molly, who is hugging their son Max, and sprints fifteen feet down the trail to a point parallel to where Hannah is.  Shaken, Hannah knows the enormity of the danger that she is in.  Tip uses the saplings sprouting from the hillside for support and steps carefully along the side hill to reach her.

Her left leg has taken the brunt of the rocky slide.  Though there are abrasions by her ankle, a major gash has been ripped open on her lower leg.  Hannah and Tip see it all; he quickly takes off his long sleeve tee shirt to make the first of three tourniquets on her left leg.  At the time, I am half way down the same path Tip has taken but see nothing that they have seen.

Later Hannah told me, Tip said to her, Omi, Omi, (her grandmother name) with a tone that “this is serious, but with the reassurance that we’ll get you through this.”  Comforted, Hannah knows she is in good hands. 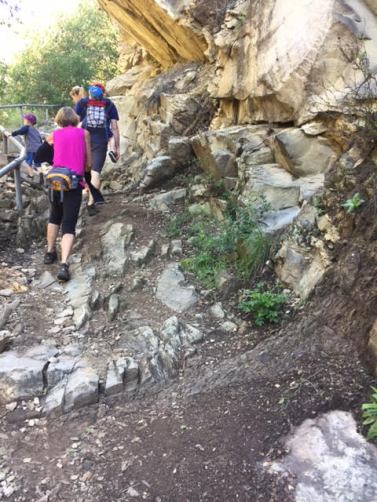 Earlier in the hike on the way to the falls, Hannah in her capris.  The trail gives you an idea of the jagged rocks of the trail.

Wearing capris down to her mid-calf, Hannah feels a strong pain in her upper thigh, but neither she nor Tip can see if there is a wound there.  Surprisingly, there is no tear to the capris above her knee.  But Tip has seen enough of the gaping gash in her lower leg to know that she could use more tourniquets, one below her knee and another around her upper thigh.  It appears nothing is broken, but adrenaline might mask a break anyway.

With all the skill of a veteran EMT, Tip slowly moves Hannah along the side of the cliff, towards the main trail.  All the while Molly, above on the trail, is distracting Owen and Max.  She is especially thankful when Max notices a bug on the side of the hillside that grabs both boys’ attention.

With Tip leading Hannah to the trail, I reach for her, and see a smiling and thankful Hannah.  Her sunny disposition belies the wounds to her left leg; I have no idea what lurks beneath her capris on her upper thigh, nor does she or Tip. 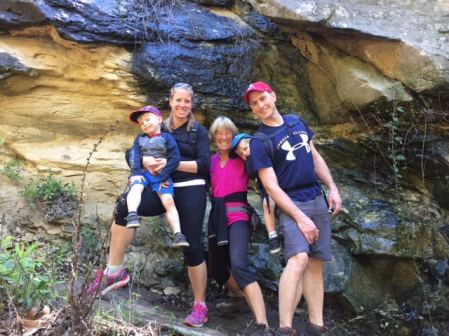 Hannah and I rarely hike with others.  Fortunate this day that Molly holding Owen and Tip with Max in his backpack joined Hannah and me for the hike.

Later Hannah remembers four things about the fall: (1) the loud pop as she hit the first sharp rock (perhaps the puncture of her leg that didn’t rip her capris! Whoa!), (2) looking down at her lower leg and seeing a gaping gash that she quickly decides she doesn’t need to look at anymore, (3) when her fall stopped on the small promontory, she could see the drop to the boulders and rocks in the creek below, and (4) her good fortune that our son-in-law Tip was the reassuring rescuer that she and we all needed.

By the way, when Tip chooses his next career after being the Tom Brady of stay-at-home dads, the world will be a better place if he considers being an EMT or a firefighter.  Hannah remembers how cool and encouraging he was under “saving her life” pressure!

Holding Hannah tightly, I now hug her with all the gratitude that she is safe.  Having seen none of what Tip has seen and buoyed by Hannah’s belief that she is doing well and can walk the mile and a half to the trailhead, she and I step carefully down the trail. 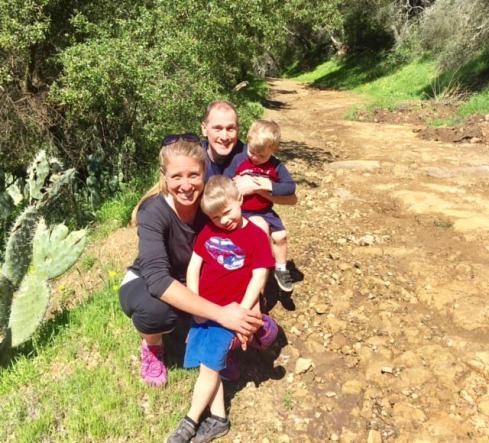 Earlier in the hike, Molly with Owen and Tip with Max.  Molly’s quick thinking had her and Owen hike ahead to get transportation at the trailhead.

Thinking quickly to save time at the other end of the trail, Molly goes ahead with Owen to get our car as close to the trailhead as possible.  Molly is doing what we need on this sunny day in the 60s, though ironically she herself is in the dark, uncertain if her  mother will even make it out without additional support.