Rockin’ Robyn with her Mama

For the Second Annual Woo Girls Reunion (Hannah, Bambi, Maxine, and Wendy – all proud graduates of the College of Wooster in Ohio), we travel to Maxine and her hubby Don’s place outside of Niagara Falls, New York.  Though it’s a 522-mile drive from York, Maine, we give it a comma (by punctuating the trip!) by stopping to lunch with our daughter Robyn near Syracuse.   Over Chinese (Hannah and Robyn) and Mexican (Dan) at the Destiny USA Mall food court, we catch up while scarfing down our lunch; later Robyn gives us a bag of goodies.

Within the bag is a book, Chicken Soup for the Soul: The American Spirit.  Robyn’s a published author!  The story of her time at Give Kids the World and her military service comes alive.  Robyn has a good tale to tell and it just reinforces how proud we are of her.

Three hours later we pull into the driveway of Maxine and Don’s out-in-the-country home.  It’s been nine months since the Woo Girls got together at our place in York on the Atlantic coast.  Last year we were all pretty much new to each.  During one stretch, Hannah and I hadn’t seen any of the women in 40 plus years.

The four women and I matriculated at the College of Wooster as first year students.  Girls had curfews and three legs needed to be on the floor every time a guy was in a girls’ room.  Freshman wore dinks as part of the freshman initiation.  Hannah was in the local Lambda Alpha Sigma sorority/club and I a member of the local Kappa Chi fraternity.  (When I pledged Kappa Chi, it was called Kappa Kappa Kappa (that’s right – KKK) and the fraternity pin was a white cross!  Really!)  Neither social club is still active at Wooster.

Charismatic and beloved President Kennedy had been assassinated less than three years before we enrolled at Wooster.  Martin Luther King, Jr. and Bobby Kennedy would be murdered while we were at Wooster.  Four students at Kent State were gunned down just 45 minutes northeast of the Wooster campus.

It’s no surprise that we all went our separate ways during such tumultuous times.  But today, as the sun goes down just north of Buffalo, New York, we, all in our mid to late 60s, reconnect.  By the way, we are having Genesee beers which were not allowed at Wooster in the 1960s.

Don and Maxine in their backyard

Earlier in the week, Maxine’s Don checked out the entire Niagara Falls hike to see how long it would take and where, if need be, we might cut the hike short.  Did Maxine marry well or not!  After our weekend together, we know she aced this test.

On Saturday morning, Maxine drives the other three Woo Girls in her car the 30 minutes to the Niagara Falls State Park while Bambi’s guy Skip and I ride with Don.  It’s Saturday of Father Day Weekend so the crowds have come to Niagara Falls. 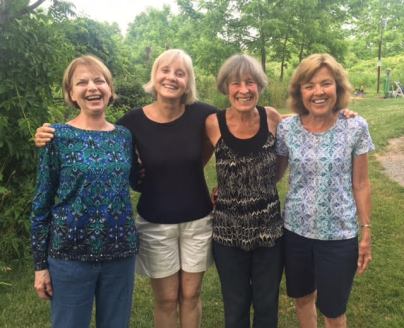 Our starting point is Goat Island, but soon we cross over to the Three Sisters Islands with views of the raging rapids in the Niagara River, just before it tumbles over the Canadian Horseshoe Falls.  As a local kid, Don would play in and among these islands, long before fences were built.

American Falls in the background

With summer crowds on the paved trails to the 188’ Horseshoe Falls of the Ontario, Canada side, we seven pair off in twos and threes in conversation and mellow hike with no sense of urgency.   The day is warming to near 90F so mellow is the word of the day.

Though there are many on the trails, we can get our pictures by the fence protecting us from the falls.  The fence is right up to the cliffs themselves so enjoy this 22 second video of the 100’ American Falls.

Further beyond there are six booths selling tickets to the Maid of the Mist boat ride for $18.25 per adult.  Since we are just going to the Observation Deck and then taking the elevator down to the sidewalk to the base of the American Falls, we are charged a mere $1.25 each.  Quite the deal!

Though our views of the falls from the Observation Deck are spectacular, there is a 300′ long long line waiting to get onto the elevator.   At noon, as I look below, I see people are not even moving, waiting in line to stand by the base of the American Falls.

Wendy with the Mainers

Never a fan of waiting (both for the elevator and the path to the Falls), I ask the others how they’d feel about passing on the elevator ride to the base of Falls.  Unanimously the other six are on board to forego the wait. It’s near 90F and Maxine and Don’s air-conditioned house beckons.

Hanging out with the Woo girls, Skip, Don, and I know we have hit the mother lode.