A vow is a vow. Would Sir Lancelot go back on a vow?  Lady Lancelot?  Not even, Baby Lancelot would. If they wouldn’t, neither will we!

After having our spirits and feet shredded by the jagged rocks of the Appalachian Trail (AT) in eastern Pennsylvania near Wind Gap, we vow to never hike in the Keystone State again. So ditching our plans to hike the AT north of Harrisburg at Duncannon this late April morning, we drive south below Gettysburg, PA through the Catoctin Mountains of Maryland to the town of Smithsburg.

The blue blaze trail leads to the main trail, the Appalachian Trail

Only later do we learn that we have passed near the presidential retreat of Camp David.  Catoctin Mountain Park does not indicate the location of Camp David on park maps due to privacy and security concerns.   Arriving at Wolfsville Road, we return to a trailhead where we parked six months ago. At that time we hiked north on the AT; today we head south.

The white blaze of the Appalachian Trail in Maryland

We need some mellow hiking today after yesterday’s jagged, spirit-breaking rocks, masquerading as a trail. Having previously hiked five times in Maryland, we pine for its mellow ridge line hiking with fewer rocks; it’s just the ticket to refresh our legs and renew our love of hiking. 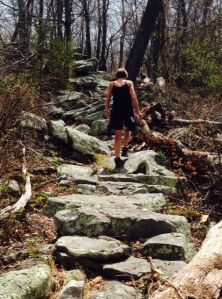 Rocky stairway on the AT

From Wolfsville Road, we climb the switchbacks up a mountain with a different kind of rocks. Flatter and smoother, these rocks are positioned by trail makers that allow us easy access up the mountain. After a day of rain, the weather has cleared and the sun shines brightly on the hiker-friendly landscape of Maryland.

Once at the summit we begin our ridge trail hiking and soon spot a group of young hikers. Always looking to connect, we learn that they are from the Lancaster Bible College in Pennsylvania. As recent high school graduates, they are backpacking and camping and completing other non-classroom activities as part of a gap year of experiences before they begin their pursuit of their Bachelor of Science degrees in Bible Studies.

Logan, a senior intern, hikes along with us as he leaves the eighteen year-olds on their own for a while. For this experience, the students are outdoors for five days to learn about themselves in close quarters; that means they can’t avoid the issues that come up with each other on the trail. 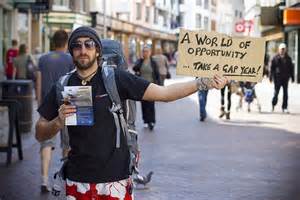 I think of a gap year as a concept from Great Britain where students spend the year between high school and college traveling, working, volunteering, or completing an internship. It seems to me that such students would bring an earnestness and commitment to their academic studies after having a taste of the “real world.”

My esteemed colleague, Dr. Hair Koirala, in the Department of Education at Eastern Connecticut State University.

As a retired professor of education at Eastern Connecticut State University and the University of New England, I taught 18 to 22 year old undergrads as well as older, non-traditional students.  These older students were returning for teacher training after often having had another career. Almost always, they were fully invested in their studies after having this “gap” time between high school and their decision to seek teacher certification.

There are some rocky stretches on the AT in Maryland

The gap year reminds me of what Mormons (Church of Jesus Christ of Latter Day Saints) do when they complete an 18 month (for young women) and 24 month (for young men) mission, often after their first year of college.  With a specific purpose to bring the Word to others during their mission, they gain the added benefit of having time to reflect on their opportunities and how they can serve others.  I can only guess they also return more devoted to their studies after going on their mission.

Thirty-four students, interns, and chaperones are strung out over the trail here in northern Maryland, hiking in groups of six to seven. And just as you would expect, they are stereotypically delightful, upbeat, willing to engage, and make eye contact; they are excellent ambassadors of Christianity. 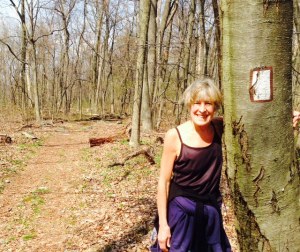 In a forest that is just about to blossom with new leaves in late April, our trail is ridge line so we have very little elevation gain as we hike. With no destination in mind, we plan to hike out 90 minutes and double back to complete three hours of hiking this afternoon. Our weary legs could use a break after the nasty, protruding rocks of the AT in Pennsylvania.  (We just can’t let it go!)

A few more rocks on the AT

We do have rocky stretches, but they are just sections amid miles of flatter, softer packed dirt and rock terrain.  Today we have done a week’s worth of whining about yesterday’s rocky trail hiking; ergo we have used up our allotment of bellyaching and finally cease our grumbling.

We run into “Little Buddy” (trail name), a twenty something out for a few days of backpacking with his father. They are agreeable sorts, in no hurry, and tell us of their surprise of getting to the Red Raven Shelter 12 miles back last night and seeing the shelter full of young hikers and tents everywhere filled with the Lancaster Bible students.

Father/son bonding has many venues. Some do it on the trail. In two days, I’ll have the chance to do some of my own with our son Will on golf courses in the Richmond, VA area. I like my bonding on emerald fairways and greens that funnel my ball to the hole. Each to his own. 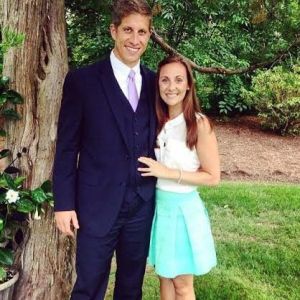 The future Mr. and Mrs. Rothermel

Descending the last mountain, I feel my left knee begin to ache from yesterday’s hike in the unforgiving rocks of Pennsylvania.  Tomorrow is a light day of canal path walking at Great Falls National Park near Washington, DC with the Family Rawding.

And then after, off to Richmond, Virginia for Will’s marriage to Laurel Ann Crane.