How do you feel driving over high bridges?  I mean, really high bridges.  Say the Tappan Zee Bridge?   I have to say I’m not a fan.  They have a word for the irrational fear of crossing bridges – gephyrophobia.

What about bridges that extend for miles like the eight mile Confederation Bridge?  I hug the center line and death grip the wheel as I hang on for dear life.  They have name for this one, too –ancientmarinerphobia (i.e., water, water everywhere).

Do tunnels give you the willies?  This phobia is called wallsacreepinginphobia.

One creepy tunnel in Plymouth, England

Caves?  Let’s talk caves.  Any reason to go beneath the ground; for any reason?  If caves are not your thing, you have speluncaphobia (You spelunkers know what I’m talking about).

When we heard of the lava tubes of Mount St. Helens, I thought, that’s nice, but you won’t catch me going subterranean.

Rim Rock (click on the picture to read the explanation)

Got to say, lava tubes are cool in the abstract.  Check out their story.  As the lava comes down the mountain it covers everything in its path.  The magma surrounds trees to the height of eight to twelve feet or more.  In time, the magma cools around the tree, but the tree doesn’t disintegrate immediately.  Eventually, the tree is consumed and what is left is a lava hole.

Sometimes these trees are knocked over by the force of the flowing magma.  It is estimated that this flow can be up to 30 mph.  When the tree is knocked over, the magma flows over it and eventually solidifies into a rocky landscape.  Again, in time, the tree disintegrates and a lava tube beneath the ground is left. 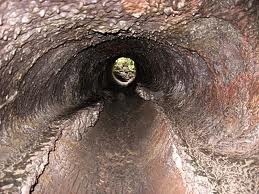 Two thousand years ago, Mount St. Helens blew its top and lava holes and lava tubes were formed that remain today at the Trail of Two Forests.  This 0.25 mile interpretative boardwalk weaves through this southwestern Washington forest near Cougar.

Boardwalk at Trail of Two Forests

Within the Trail of Two Forests lies The Crawl, a lava tube that stretches for some 50-60 feet within the park.  I have no intention of navigating underground through this lava tube.  Ah, but with the daring of a champion water skier, Hannah is drawn to this subterranean adventure.

The more she learns about lava tubes, the more she thinks climbing down one of the holes and edging along the lava tube sounds pretty cool.  I mean, we are 2500 miles from home and may not be back soon.  You go girl.

The Crawl (click on picture to read the explanation)

The Crawl forks prior to its midpoint.  To the right, the opening is not wide enough for a person to emerge while to the left one literally sees the light at the end of the tunnel.

Hannah descending into the lava hole

Borrowing a flashlight from a fellow hiker, Hannah waves a soulful good-bye, I bid her adieu, and I think, ours has been a good marriage.  Just kidding, it’s been great and I take to the boardwalk to see her emerge at the other end.

Crawling on her knees in just shorts, Hannah relates later that she didn’t feel any “fear” at all.  It was fun, but I wouldn’t have done it without a flashlight since I would have missed some of the detail of the tube itself along the way.

Pumped, Hannah makes it seem like a piece of cake.  I think, I like cake.  Perhaps it’s time for Danny Boy to step out of his comfort zone.  I wouldn’t say I am super claustrophobic.  It’s not a matter of peer pressure; my high school friends are nowhere to be seen.  All of a sudden, it just seems doable now that Hannah has shown the way.

For the first section, I crawl on my knees on the rocky surface floor.  I knee-along grabbing at the rock in front of me.  So far, so good.  The turn left is obvious and now I can start duck walking to the light.  I, too, feel no fear, just a little discomfort crouching along this unforgiving rock cylinder.

I stretch, smile, and nod in satisfaction as Hannah calls out, “Good job.”  Fact is, I am feeling that “Mr. Cool” just might apply.

Perhaps, this experience is a metaphor for life.  Stick with me.

When descending into life’s turmoil, look not back, but forward.  Though darkness surrounds you, use your flashlight and move forward in faith that you will emerge.   When the road forks, look to the light and go forth.  Your faith and your enduring spirit will bring you to the light.  I’m guessing many great religions are based on this one metaphor.

Or maybe its message is, Don’t be such a baby.  Wah, wah, wah.  Give it a shot.  What’s the worst that could happen?  It’s not like the earth is going to explode…